The rumors of Twitter’s new profile layout were confirmed recently and it’s left many people wondering – why the big change? With technology rapidly altering, social media changes are always on the rise as well. 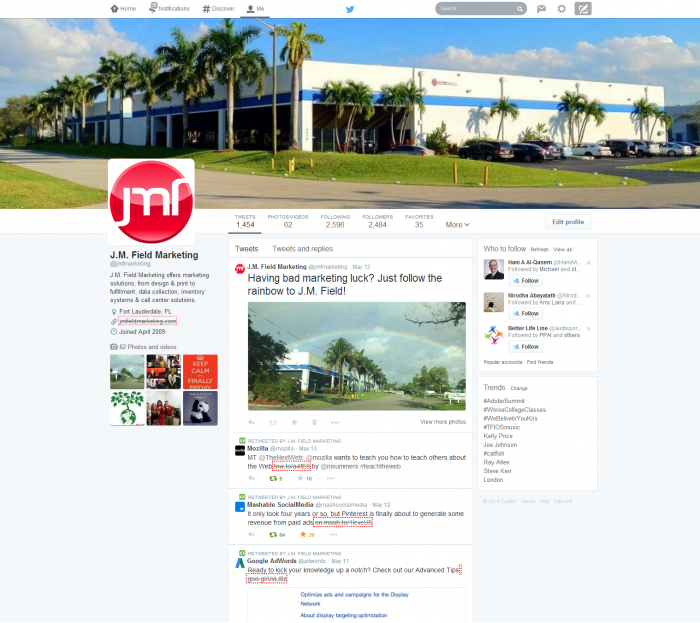 Twitter has created a new layout with an elongated header photo that is strikingly similar to Facebook. Besides an enlarged header photo and lower placement of a profile picture, Twitter has added additional features that affect the placement of tweets as well as viewing settings. For instance, the feature “Best Tweets” enables users’ tweets that received the most interaction and engagement to be slightly larger than tweets that received a less significant amount of interaction. Another new feature from Twitter is that users are also able to “pin” one of their choice tweets to the top of the page for all followers to see. An additional feature that Twitter has included is the option to filter tweets. In this case, it isn’t filtering one’s own profile but rather for viewing other users’ profile. Filter options include just tweets, tweets and replies or tweets with photos/videos.

Although the layout of Twitter seems similar to Facebook, it is still a bit harder to edit. For instance, unlike Facebook where the cover photo is easily clicked and repositioned when you click “Change Cover” icon, it is not easily repositioned. Twitter users must visit the settings to position their header photo. The position of edits is different, too – Facebook’s edit button is on the right hand side and on Twitter, it is in the middle. Nonetheless, Twitter’s new background picture is easier than ever to position and size than before. Users can even zoom in/out and reposition instead of only being able to upload a picture. Keep in mind that like Facebook, Twitter’s cover photo may show up differently on iPhones and Android than on a computer.

Is the New Layout Available Now?

Although it was only available for celebrities at its first arrival , the new look is now available for all Twitter users. Want to get the new layout? Click here!

Our social media experts specialize in using the most recent social media trends to help elevate our client’s brand, deliver their message and engage with their consumers and potential clients. Learn more about our social media marketing here.

Twitter’s New Layout and What You Need to Know About the Recent Social Media Makeover was last modified: February 25th, 2015 by Carmen
Categorized in: Social Media
Published by Carmen