The Fort Lauderdale Strikers put a call into J.M. Field Marketing on Tuesday morning. “Can you get it done by tomorrow?” they asked. IT was shirts, shorts and socks, and they needed them yesterday.

We don’t really talk like we are a Madison Avenue advertising agency. The sense of urgency, however, was very real. Who the shirts were for and why the Fort Lauderdale Strikers wanted them in a hurry puts perspective on that urgency. Urgency in the name of a good cause.

With some of the top tennis players in the world in Miami for the Sony Ericsson Open, the Fort Lauderdale Strikers invited players like Rafael Nadal, Andy Murray and Novak Djokovic to play in the Hope for Japan Charity Soccer Match. But, they didn’t want to play with the tennis stars, they wanted to play AGAINST them. That required full football unis to represent the opposition.

Enter us. They were responsible for outfitting 11 or so of the best tennis players in the world with the opposing jersey in a 24-hour turnaround. 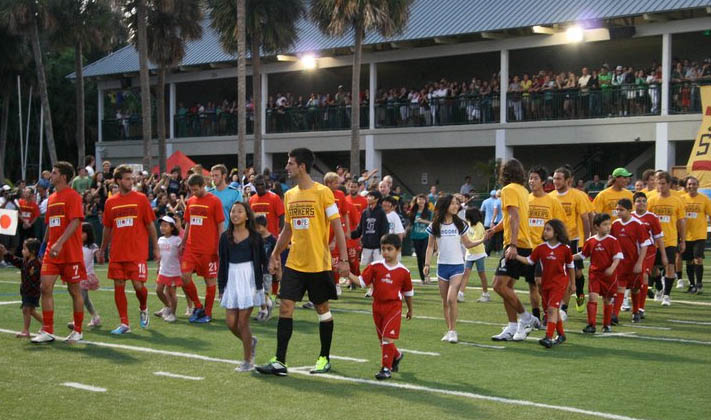 The Djokovic-led All Stars lost, 5-2, but did get goals from Andy Murray and Marcos Baghdatis. Djokovic, who will enter the event in Key Biscayne this weekend with his impressive 18-0 singles record for 2011, has been busy of late. Prior to the soccer match, he and Rafael Nadal played in an exhibition match in Colombia. But, he and his teammates relished the opportunity to give to this wonderful cause.

“I want to thank to (sic) all fellow tennis players for showing their support and good heart for today’s charity football match! Love you guys,” Djokovic wrote on his Twitter page.

The Fort Lauderdale Strikers were selling season tickets, with half of all sales donated to the Japan relief efforts. There was a gala dinner after the game to further the donation efforts. The team is also auctioning off authentic signed game-worn jerseys with the proceeds also donated.

Not bad for 48 hours of planning.

On Sunday the team will unveil its logo in Downtown Fort Lauderdale at Centenniel Fest and a jersey unveiling on March 29 at the Seminole Hardrock Hotel and Casino. The Fort Lauderdale Strikers kick off their season on Saturday, April 9th against Edmonton at Lockhart Stadium.