Drones are an extremely hot topic right now, since big name companies like Amazon, UPS and Dominos are experimenting with drone delivery systems that could change the world. As drone technology becomes more mainstream, it won’t be too long before shipping and fulfillment companies all over the globe start utilizing some type of drone delivery system. Now, Google can be welcomed to the family of drones with its newest undertaking, Project Wing. 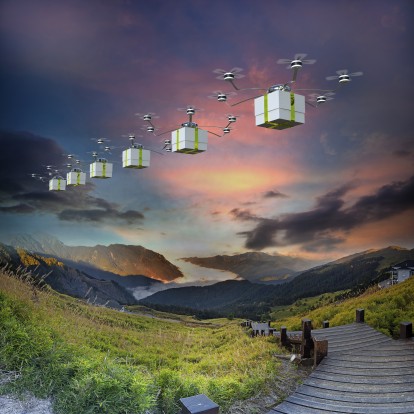 What Makes Project Wing a More Unique Drone Delivery System than the Others?

Google X, a division of Google that’s in charge of developing advancements in technology, went through a two year effort toward building up this project involving autonomous flying vehicles. While Amazon’s intentions for Prime Air, their drone delivery system, are focused on package delivery to shoppers, Project Wing has other hopes for its service.

Google already proved its drone delivery system capabilities, with Neil Parfitt serving as the official guinea pig to order and receive a package by drone. However, that doesn’t mean Google is going to stop there. There’s been talk about this new drone delivery system’s potential and how it could eventually be used for humanitarian relief in disaster situations.

Humanitarian Relief: Instant Aid in the Form of Winged Drones

Even though the Google drones are relatively small and only weigh 22 pounds, they’re capable of much more than you think. Just the quickness factor of the service is worthy of attention, according to Astro Teller, the captain of Google X’s Moonshots. He stated, “What excited us from the beginning was that if the right thing could find anybody just in the moment that they need it, the world might be a radically better place.”

Although Project Wing can surely compete with Amazon over package delivery, the drone delivery service has bigger projects up its sleeve. The global benefits are in a category of their own, since the drones could possibly assist in delivering medicine, food and water to disaster relief zones. Teller confirms this by saying, “Even just a few of these, being able to shuttle nearly continuously, could service a very large number of people in an emergency situation.”

Pros & Cons: What Does Drone Technology Mean For Fulfillment?

There may be drone tech enthusiasts out there trying to make a difference in the world, but that doesn’t mean that everyone’s going to wrap their heads around a drone delivery system. One of the most significant benefits of drone delivery being implemented into businesses is its fast factor. I mean, if you have an Amazon Prime Air drone delivering your package in 30 minutes or less, you’re going to be a little impressed. Aside from the speediness, drones are also being approved for their eco-friendly status and their initiatives for cheaper delivery options.

With that being said, drones also have the possibility of affecting fulfillment and retail industries in a negative way. If drones are doing a majority of the work by delivering packages to customers, why should a fulfillment company keep, or even hire, delivery drivers? There would be no need for vehicles, boats or planes delivering merchandise, which in turn means a higher unemployment rate because jobs could potentially be lost.

Other disconcerting scenarios make the benefits of a drone delivery system a little hazy, like someone actually stealing the drone or the package it’s programmed to deliver. Either way, with companies playing follow the leader with drone delivery, it looks like drone technology is only just beginning.