When was the last time you saw a major marketing campaign centered around a vegetable, let alone one that many people aren’t fond of?  I bet it’s hard to remember. Well, following the release of the fourth Shrek movie, “Shrek Forever After,” the Vidalia Onion Committee, a committee that represents approximately 100 growers of onions in Georgia, has released a marketing campaign centered on their trademark product, Vidalia Onions.

The company is using the character’s likeness on its packaging, marketing collateral and its website.  The connection between Shrek and onions dates back to the first movie of the franchise, when Shrek explains to donkey that Ogres are similar to onions in that they both have layers.  To many people this marketing ploy would have seemed a bit of a stretch, but the Vidalia onion growers are reaping the benefits, posting a 30 percent to 35 percent increase in demand for their bags of onions.

Many officials of the Vidalia Onion Committee credit this to the marketability of Shrek to kids. It’s no secret that children often have a large say in what type of food products are purchased for a household, especially if the food they crave is economical and healthy. 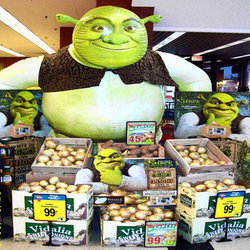 In recent years, using loose connections of celebrities or famous icons to products has become extremely popular.  Coca-Cola is currently in the midst of a marketing campaign involving Dr. Pepper.  The company has used many celebrities with a connection to the word ‘doctor’ as a marketing tool.

The ideas almost seem too simple, but that is what makes it so successful. The key to a successful marketing campaign is that it should be easy to understand and attention grabbing. There are many other things that go into an advertisement but these two things are simple, yet effective enough to get the job done.

Looking back, the idea to connect onions with ogres was a genius marketing move. With the success of this broad based campaign and others like it; it wouldn’t be surprising to see it become a more popular and commonly utilized strategy. Plus, it doesn’t have to be a hit movie, a company can associate themselves with a local play or musical that relates to their product if they want to market themselves regionally.

Movie Marketing: Ogres are like Onions was last modified: February 23rd, 2015 by
Categorized in: Direct Marketing
Published by